Integrating Young Minorities into the Workforce: Lessons from Charlotte, NC

Dr. Ryan Monroe is Chief Academic Officer at Carlos Rosario School in Washington, DC.  He was a participant in AICGS’ site visits in Charlotte, NC, as part of the Institute’s work on integrating young minorities into the work force.

In case you were wondering what I was doing last week…

The American Institute for Contemporary German Studies (AICGS) sponsored the seminar. Their mission is “to provide research that leads to new solutions to public policy challenges facing the U.S. and Germany.”  A major public policy challenge in Germany right now is the arrival of nearly a million refugees and asylum seekers from Syria, Iraq, Afghanistan, Eritrea, Albania and other countries.

AICGS has ties to Charlotte and so they arranged this opportunity to visit the city and learn about it through the lens of immigrant integration. The group of six of us, three Americans and three Germans, spent the week together visiting, asking questions, learning, and laughing. We were joined by community and regional leaders who shared their insights, successes and challenges with us. 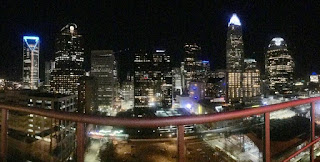 Immigrant Integration Task Force of Charlotte was established after Charlotte residents were shocked by the racial divide that became apparent after a police shooting.  Charlotte became a Welcoming America city and decided to survey and listen to immigrants and determine how to better meet their needs. They worked for two years and made a report with a list of recommendations, many of which centered on supporting small businesses that are immigrant owned. While immigrants are about 10% of Charlotte’s population, they own 30% of Charlotte’s small business. One innovative idea was to certify “International Corridors” where multiple immigrant businesses would come together for the designation. Charlotte’s public school district has also committed to establishing more dual language programs where native English speakers and native Spanish speakers learn academic content together in both languages. 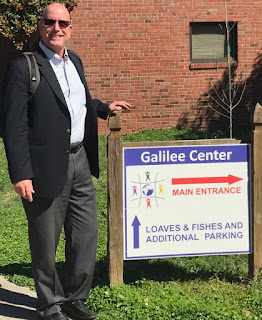 Latin American Chamber of Commerce in Charlotte is a strong partner in supporting immigrant entrepreneurs. This small office of three employees provides a wealth of learning and networking opportunities and partners with other local chambers of commerce such as the LGBT Chamber and the African American Chamber. Galilee Center supports refugees in a space shared among Central Piedmont Community College, Catholic Charities, and Refugee Support Services. These organizations coordinate their efforts and help to settle hundreds of refugees connecting them to housing, jobs, education and social services. Central Piedmont Community College(CPCC) has some impressive programming including their WIOA funded Working in America program, an ESL program which prepares immigrants for work using the soft skills curriculum called Working Smart. The curriculum was adopted by 31 agencies throughout Mecklenburg County and throughout NC and SC. We met with adult immigrant students using the program and they sang its praises. 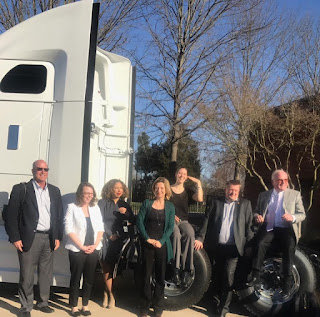 We also learned about employers and training programs tied to the manufacturing sector. CPCC engineering technologies program trains students to work in the field of advanced manufacturing. We toured the DAIMLER factory in a rural area about an hour north of Charlotte. They assemble Freightliner trucks and Thomas school buses. The plant’s general manager is German, but most of the employees were Americans who lived in the surrounding rural area. This German company located there because the local workforce has a strong work ethic and mechanical abilities learned through maintaining farm equipment. There is a union that works with management. Distribution and Marketing Services, Inc (DMSI), on the other hand, relies on refugees to sort and label clothes for Ross. One of the bosses who heard we came from DC and were interested in their refugee labor force asked hopefully if we were going to bring them more refugees, because “they are great!” (I guess he hadn’t been paying attention to Trump’s recent executive order cutting the number of refugees coming to the US in half.)

The situation for Charlotte’s undocumented immigrants was less clear. They were not employed at the factories or attending the community college’s programs. Refugees, however, were being supported pretty well considering the limited resources and the bureaucracy that surrounds their support. 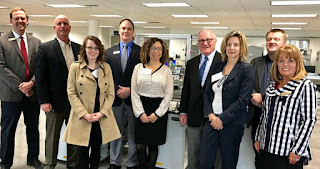 The seminar was an exchange of ideas, so there were a few things that people found very interesting about our way of doing things in the District of Columbia. For example, the fact that at Carlos Rosario School we do not know our students’ immigration status seemed unusual to the folks at the Galilee Center. They were also very interested in DC’s Kids Ride Free program that recently expanded to young adults in school and is being considered for students in schools for adult basic education. Of course, the whole concept of charter schools for adults with academic and wrap around services was found to be of great interest to some of the people I met in Charlotte.

Unrelated the topic of immigrants, HB2, the so-called Bathroom Bill, also came up more than once in our meetings and conversations. At one agency they had two single stall bathrooms, one assigned for men and one for women. We were invited to go ahead and use either one we wanted in defiance of the law. If I had gone into the one with the symbol for ladies’ room, I would have been in violation of the HB2. I shared with the group that in DC public facilities cannot have single stall bathrooms assigned to a particular gender. After our conversation, our host began to think about how to change signs on the bathroom doors.

I’m appreciative of the week I spent with AICGS which has helped me to think more about Germany-US relations and has motivated me to pay more attention to current events involving our two countries. I’m also more appreciative of the District of Columbia and our progressive policies, and I have great respect for the efforts of Charlotteans who in many ways try to move in a direction that is at odds with much of the rest of their state. 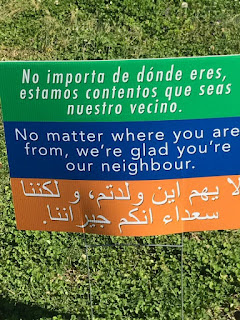